Peacekeeping in Cities: Is the UN Prepared?

We live in an era of dramatic urban growth. Over half of the world’s population lives in urban areas and in the next 50 years this figure is projected to increase to two thirds. The pace of urbanization in fragile and conflict-affected countries has been particularly pronounced, increasing by 298% over the past 40 years.1 This growth is projected to continue (see Figure 1). As a result, within the next 15 years, the majority of countries currently hosting UN peacekeeping missions will be largely urban. 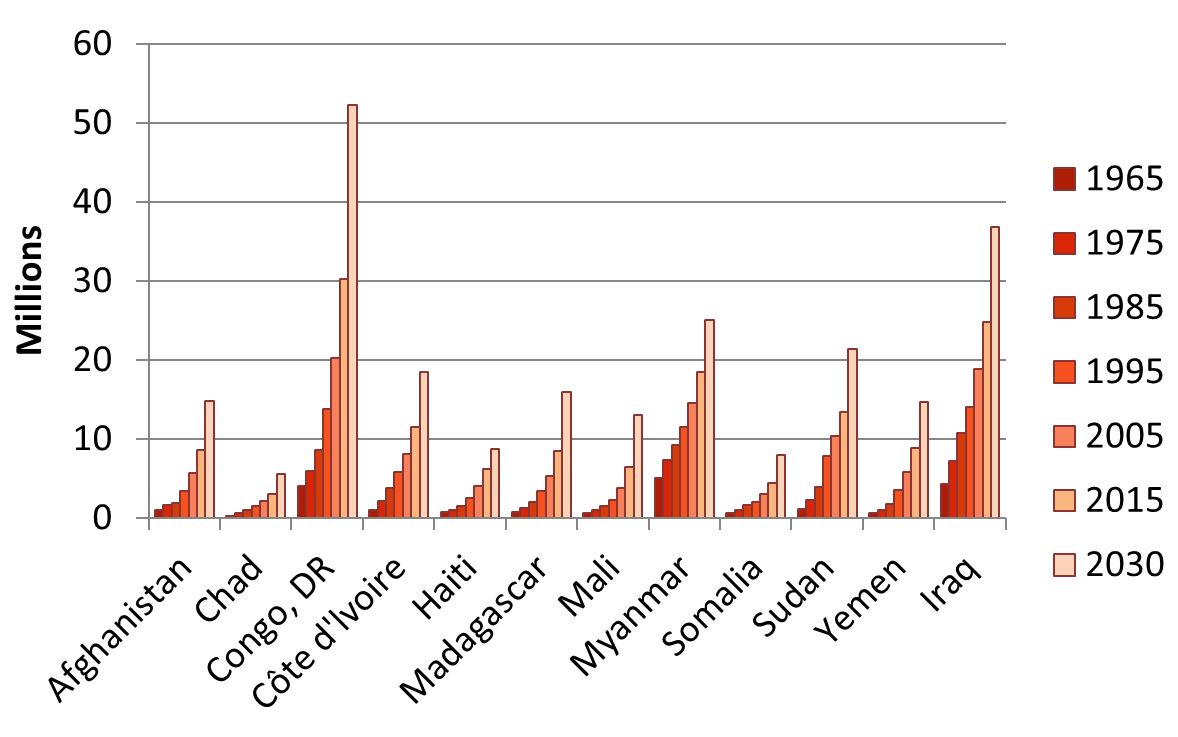 The concentration of people, power, and profit in cities creates many possibilities for tackling some of the world’s most pressing problems. For instance, there is a good case to be made that the fight for sustainable development may be won or lost in cities. At the same time, urban areas – particularly in conflict-affected contexts – are emerging as epicentres of multi-layered violence and extreme vulnerability. For example, parts of Bangui, Port-au-Prince, and Abidjan, have been under the control of gangs and militias that victimize local populations.

Cities have long been the prize that rebels and government forces compete to control and they are also prime targets for terrorist attacks. Bamako, the capital of Mali, was the site of a deadly hostage situation in November 2015 when Islamist militants took 170 hostages and killed at least 20 of them. In Bangui, the focal point of one of the largest UN peacekeeping missions, violence reached “gruesome levels of cruelty” in 2014. With killings in the capital reported daily, the interim Prime Minister of the Central African Republic declared that the situation had “gone beyond a peacekeeping operation, it is now urban warfare.”

A number of conventional militaries and governments are already recognizing the challenges presented by increasing urbanization. Elsewhere, UNU-CPR has discussed the challenges of fragile cities characterized by rapid and unregulated urbanization, high levels of inequality, youth unemployment, homicide and criminal violence, poor access to key services, and exposure to climate threats. Yet, the recent report of the High-level Independent Panel on Peace Operations (HIPPO) paid no attention whatsoever to the implications of urbanization on the future of peacekeeping.2 In fact, the words ‘urban’ and ‘cities’ are entirely absent from the report.

Urban-based challenges facing UN peacekeeping missions are real and growing.3 They include dealing with situations characterized by gang-related crime and violence and they also link to the emergence of deep-rooted peacekeeping economies around which pre-existing illicit markets and the sex industry thrive. The ever-changing formal and informal authority structures and contests for power in urban environments further complicate the ability of the UN to “keep the peace.” While intelligence-led innovations and operational adaptations are being made on the ground in UN missions to deal with insecurity in the city, the current approach remains ad hoc and in need of strategic guidance.

In places such as the Central African Republic (CAR) and Haiti, UN peacekeepers have had to operate in densely populated urban settings characterized by gang-related crime and the presence of non-conventional armed groups. Haiti in particular is often used as a classic example of urban peacekeeping. During a period of escalating violence throughout 2003 and 2004, the UN mission (MINUSTAH) was given a mandate to intervene militarily in gang strongholds in order to regain territorial control and restore state authority. This ultimately led to a series of forceful MINUSTAH interventions resulting in civilian casualties and property destruction, especially in urban centres, while severely damaging the reputation of the mission. For example, Operation Iron Fist – launched on 6 July 2005 in Port-au-Prince’s slum area of Cité Soleil, during which MINUSTAH fired over 20,000 rounds of ammunition – is believed to have killed 23 civilians, in addition to several gang members.

While these interventions did lead to some tactical successes, effectively allowing Haitian authorities to regain control of these areas through joint military-police operations and efficient intelligence-led peacekeeping, such successes were short-lived. Predatory gangs quickly re-emerged in the slums of Port-au-Prince following the devastating 2010 earthquake.  And as was reported in the March 2016 Secretary-General’s report to the Security Council, recent electoral violence in Haiti has seen significant armed confrontation between rival gangs leading to a dramatic rise in the number of reported homicides. These challenges question the ability of MINUSTAH to promote longer-term stability and security in urban areas, absent a political strategy able to tackle the deeply rooted politico-criminal networks sustaining violence in the country.

Such urban-based challenges to peacekeeping are not unique to Haiti. In CAR for example, alarming rates of violence in the capital of Bangui have led commentators to describe the current situation as one of “urban guerilla warfare”. In this context, the peacekeeping mission (MINUSCA) has had significant gaps in its capacity to respond, despite becoming a prime target of armed groups in the city.

Initially, MINUSCA tried to adapt in response to urban challenges by creating a joint police and military task force in Bangui with a unified command structure led by the police component. The creation of the Bangui Joint Task Force, which gave the police the primary responsibility for security in the capital, was regarded as “innovative” and particularly suited for operating in urban environments. However, gaps in its capacities were quickly exposed during three days of violence in September 2015 and reports indicate that MINUSCA soldiers and police were “almost entirely absent from key areas of this conflict.” This was attributed to a lack of armored personnel carriers, the failure of intelligence gathering capacity, and the poor motivation of some units. Since then, steps have been taken to address these shortcomings and major outbreaks of violence have been avoided in the city. Nevertheless, critical questions remain with respect to the capacity of MINUSCA to fulfil its protection mandate in an environment where political, ethnic, criminal, and communal violence intersect in highly unpredictable ways.

More generally, the demand for policing is increasing across multiple peacekeeping missions and the role of the UN Police (UNPOL) is expanding. This makes UNPOL more likely to operate in complex urban settings and raises concerns around varying standards and approaches, as well as capacity limitations and gaps in training.4 Whilst policing is not confined to the urban environment, cities often present another layer of complexity in a conflict-affected country. Large-scale protests are often concentrated in densely populated areas, and the civilian protection role accorded to UNPOL (through high-visibility patrols, management of crowds, and protection of UN staff and facilities) is likely to be of a different nature in urban environments than in rural ones.

In particular, UNPOL’s growing use of Formed Police Units (FPUs) – which now make up the majority of UN Police personnel in the field – raises concerns around varying standards and approaches, as well as capacity limitations and gaps in training. Clearer guidance is needed on the precise roles of different UNPOL components, the use of force, and coordination between the police and military, as illustrated in the cases of Haiti and CAR. UNPOL is particularly valuable in places where military force may be unsuitable to prevent violence or criminality, and can have a key role to play in urban areas – but this role should be better articulated, with context-driven training that reflects strategic priorities.

Peacekeeping economies in the urban space

In addition to the inherent challenges of conducting military operations in urban settings, peacekeeping operations also have widespread effects on the urban environment. The idea that international actors can have a profound impact – either damaging or beneficial – on their surroundings is captured by the notion of “peacekeeping economies”. Urban areas tend to be the loci of economic activity, and urban markets present important centres of taxation for armed groups, with universities sometimes serving as bases of recruitment. The impact of peacekeeping economies is often exacerbated by the conflict-related influx of populations to cities, which can risk significantly distorting urban economies. Peacekeepers, and humanitarian actors more widely, risk inadvertently implicating themselves in propping up conflict economies through otherwise benign actions such as housing rental.

More nefarious are the local sex industries that peacekeepers contribute to sustaining. Notwithstanding the UN’s zero-tolerance policy against sexual exploitation and abuse (SEA), including engaging with the sex industry, SEA “has been judged the most significant risk to UN peacekeeping missions, above and beyond other key risks including protection of civilians.” Whilst prostitution is not confined to cities, urban populations are particularly vulnerable to abuses due to greater ‘leisure’ infrastructure, more contact between local populations and peacekeepers, and the high concentration of many troops in such urban spaces.

The need for context-driven approaches

There are of course many examples of conflict and civilian protection concerns that remain largely rural in nature; the conflicts in South Sudan and the Democratic Republic of the Congo are two such examples. Indeed, strategies such as MONUSCO’s ‘Islands of Stability’ have been criticized for their focus on population centers, to the detriment of the ‘swamps of insecurity’ that threatened to emerge in the surrounding areas.

Yet, the issues highlighted above, coupled with urban population growth and the changing nature of violence, should push the UN to think harder about the unique challenges that operating in an urban environment poses for peace operations. This post is only a snapshot of some of the examples of where urban contexts have already shown themselves to present such challenges for peacekeepers, not to mention the rest of the UN’s intricate peace infrastructure. This is not to suggest that the urban should supplant the rural as the focus of peace operations, but that urban-based responses must be prioritized to a greater and more systematic degree than is currently the case. Whilst peace operations obviously cannot mirror the approach of national militaries, the follow-up to last June’s report on UN peace operations should include considerations of the urban context in responding to the contemporary challenges faced by peace operations. In particular, recognition of the centrality of cities as “strategic sites” of political and security dynamics will be key if peace operations are to take on board HIPPO’s push to prioritize political solutions in order to ensure lasting peace.

An abridged version of the this article has been published by the United Nations University-Maastricht Economic and Social Research Institute on Innovation and Technology (UNU-MERIT) here.

Are Aid Agencies Ready to Deal With War, Terrorism, and Crime in Cities?