The Organization for Economic Co-operation and Development published States of Fragility 2018 on 17 July 2018. The report includes short pieces on trends in fragility by external authors, including this contribution by the Centre for Policy Research's Richard Gowan.

Fragile contexts are increasingly becoming battlegrounds in regional and international geopolitical contests. Full-fledged wars between states remain rare, but the distinction between intrastate and inter-state conflicts is now often badly blurred. Of the 47 intrastate wars recorded by the Uppsala Conflict Data Program in 2016, 18 (38%) were internationalised “in the sense that external states contributed troops to one or more sides of the conflict”. This figure is exceptionally high by post-Cold War standards. It may also underrepresent the number of internationalised civil wars as it does not include cases in which outside actors support combatants with arms, money or proxy forces rather than only troops. 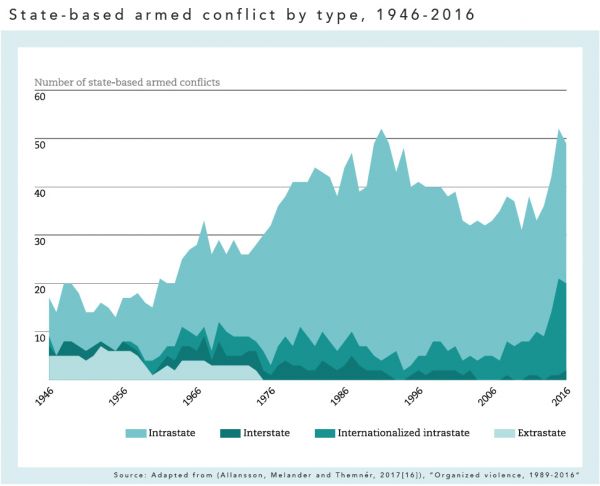 While many studies of conflict-affected states now emphasize their local dimensions and small-scale conflict dynamics, the trend towards the internationalization of civil wars presents new worrisome challenges. As Erin K. Jenne and Milos Popovic have noted, studies show that external interventions make conflicts “far bloodier and more protracted than non-internationalized civil wars.” External actors offer combatants additional resources to sustain conflicts that would otherwise lose steam. They also complicate peace making by expanding the universe of interests and “veto players” involved in diplomacy and can get in the way of neutral mediation efforts.

Where global and regional powers support opposing sides in a civil war, a conflict can also poison broader international relations and undercut international institutions. The case of Syria has painfully illustrated all these trends since 2011. As more and more powers have become directly and indirectly involved in the multi-front conflict, the United Nations Security Council has been repeatedly deadlocked over how to deal with the crisis.

Not all external interventions in civil wars are bad. The rapid French and African intervention to stop jihadist and rebel forces from overwhelming Mali in 2013 stopped the crisis from spiralling out of control. Nonetheless, protracted international civil wars are liable to create vicious cycles of international competition, serious violence and failed diplomacy. Historical cases such as the U.S. intervention in Vietnam and the Soviet misadventure in Afghanistan show that such cycles can be major drains on an intervener’s resources and political capital. International decision makers need to ask why internationalised civil wars are on the rise and take steps to defuse and prevent such notably ugly conflicts.

These steps are not incompatible with policies to address the local origins of conflict. The best way to stop a civil war becoming internationalised is to remove potential domestic sources of violence. Had the Syrian government and opposition reached a settlement in 2011, when violence and outside interference remained relatively limited, the country’s descent into chaos and its pernicious international consequences could have been avoided. Stopping violence once it starts is never simple or straightforward, and a number of factors mean that more rather than fewer civil conflicts will become internationalised, but averting or containing this trend must be a priority.

What is driving the internationalization of conflict?

There is no single explanation for the growing trend of internationalisation of civil wars, but three causes stand out:

Given the limits of current international mechanisms for dealing with internationalised civil wars, what options are available for controlling this phenomenon? The simplest answer is that governments should show restraint and either avoid engaging in other countries’ wars or do so within extremely strict limits. In reality, decision makers in many capitals are likely to encounter overwhelming pressures to engage in future civil wars. Simply counselling restraint will not suffice. More practicable mechanisms may include:

In an era of mounting geopolitical tensions, such gradual steps may seem unequal to the risks of further major violence. But efforts to manage internationalised civil wars have the potential to save lives, help states avoid collapse and reduce frictions amongst global and regional powers.  A prevention agenda focusing on these priorities would help secure not just states experiencing fragility, but the entire world.

To read the OECD’s report, please visit: States of Fragility 2018.