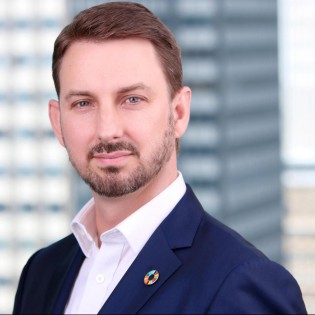 Dr James Cockayne is a consulting non-resident Senior Fellow to UNU-CPR’s modern slavery programme, and serves as Head of the Secretariat for the Liechtenstein Initiative for Finance Against Slavery and Trafficking (FAST).

Dr Cockayne holds a concurrent appointment as Professor of Global Politics and Anti-Slavery at the University of Nottingham. He was Director of UNU-CPR from July 2018 to June 2020, and head of UNU’s Office in New York for five years prior to that. During that time his work with UNU-CPR included the formulation of the Code of Ethics that now binds the President of the UN General Assembly; advice to senior UN leaders on digital privacy, internet governance and cybserecurity; rethinking global drugs policy; and work with the UN Security Council on due process in targeted sanctions. He is a noted authority on organized crime and global governance.

Dr Cockayne previously served as Senior Fellow at the International Peace Institute; Co-Director of the Centre for Global Counter-Terrorism Cooperation; Principal Legal Officer in the Australian Attorney-General’s Department; and worked in war crimes trials and counter-terrorism capacity-building in Africa.

He is a member of the Advisory Board of the Journal of Modern Slavery, and was previously Chair of the Editorial Committee of the Journal of International Criminal Justice. He is the author of Hidden Power: The Strategic Logic of Organized Crime (Oxford University Press, 2016).

Dr Cockayne was awarded a PhD in War Studies from King’s College London, an LLM at New York University and the University Medal in Government and Public Administration during LLB and BA degrees at the University of Sydney.

States Back a UN-led International Response to COVID-19: Now What?

Due Process in UN Targeted Sanctions

UNU-CPR at the World Economic Forum in Davos

New Collaboration in the Global Effort to Fight Modern Slavery